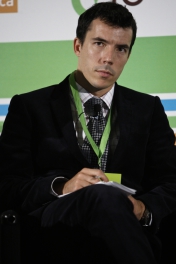 Carlos Mulas is author or co-author of the following books:

Carlos Mulas has published in major national and international academic journals in the areas of public economics, European economy and economic policy. His most cited articles are:

-The phasing of Fiscal Adjustments: what works in emerging market economies? (Review of Development Economics, 2006)

He was the author of a blog hosted by El Pais entitled "Economics for the 99%" He has also published numerous articles of opinion and El País, his last article published in the Business section of El Pais was co-written with Olivier Blanchard, the IMF chief economist and discusses the outlook for global growth.

Since then, member states have named Lisbon coordinators and elaborated their NRPs annually. The Commission has then assessed the programmes – with a greater forcefulness each year. Without any doubt, the new process, since 2005, has improved the poor level of coordination which exists between the different reform agendas, but it has not managed to provide the highly visible strategy that was hoped for. In addition, the advances made in many areas continue to be limited.

Despite of the advancements, the risk that all the reform processes will again lack coordination is considerable for two reasons: from the Community point of view, responsibility for the areas of labour and microeconomic reforms (the core of the Lisbon Strategy) is in the hands of member states, and the Commission does not have sufficient instruments to lead them; and from the intergovernmental point of view, the actual overlap produced in many areas between the distinct formations within the council induces dispersion rather than aggregation.

To solve some of these weaknesses a series of minor technical measures have been devised, almost all to reinforce the role of the Commission in this process and to avoid the contradictions that are generated in the Council itself around its own role.9 Based on the work of Murray10 and Mulas-Granados,11 and also incorporating other studies, the proposals can be placed into four groups:

Having developed all the problems and proposals for improvement in previous sections, it is evident that an ambitious reform of the system of EU economic governance would have required a complete section in the Inter Governmental Conference launched in June 2007, a meeting that six months later led to the final agreement in Lisbon.

However, things did not work out that way. Given the need to save crucial aspects of the Constitution – such as the distribution of votes in the Council and seats in the Parliament, the division of responsibilities between the EU and member states, the presidency of the EU and the figure representative for foreign affairs – the fundamental questions of economic governance were postponed. Despite all of this, and although there were no modifications made regarding the governance of monetary policy, some improvements were introduced in the governing of fiscal policy and in the processes of economic reform which are worth pointing out.

Firstly, regarding fiscal policy, the modification which was introduced to reinforce the role of the Commission in applying the Stability and Growth Pact is important. To achieve this, article 104, section 6, was modified by substituting the word “recommendation” with the word “proposal”. With this small modification, unanimity will be needed (everyone with the exception of the country to be sanctioned) to reject any proposed fine of the Commission. In this way, from now on when the Commission proposes (and not only recommends) fines in applying the procedures for excessive deficits, the probability of applying the sanction will be much higher and will avoid situations like the Franco-German veto of 2003.

Secondly, in matters relating to economic policy coordination, the new Treaty has included a modification of article 99 to reinforce the role of the Commission in this aspect.13 In addition, coordination has been strengthened with the drafting of a new article 114, that among other things, confers on the Council the responsibility to “strengthen the coordination and surveillance of budgetary discipline,” as well as “to formulate broad economic policy guidelines” for member states, assuring that they are compatible with those adopted by the rest of the Union. It also assures that they are effectively monitored.

Finally, another important advance has been the inclusion of measures which give legal standing to the Eurogroup as contained in two new articles (115 and 115bis). The goal here is to provide one voice for the euro in the world monetary system. It also recognises that the Council might designate (after a proposal from the Commission) “unified representation within financial institutions and conferences”. Or, in other words, there is a serious possibility that a Mr. or Mrs. Euro may be assigned responsibility for representing the single currency internationally.

Reform after the financial crisis

More so than the issues relating to traditional aspects of economic, fiscal and monetary policies that have been discussed until now, the debate on economic governance has dramatically shifted focus during the last year as a result of the financial crisis.

The crisis has shown that the current system of governance may be more appropriate for good times – because it is stable, foreseeable, and has the necessary incentives – than for bad times.14 In times of crisis, the current system lacks crucial properties such as speed of reaction, discretionary powers and centralised processes of decision-making in key areas of financial and fiscal policy.

For this reason we have seen a new area of discussion opening and developing around the need for a stronger more coordinated system of financial supervision, capable of preventing sudden cross-border systemic crises. In past months, many have defended the need to introduce a new European Financial Supervisor,15 whereas others have pushed for a new role for the European Central Bank. While the introduction of a new financial authority will require a modification of existing treaties (with all the political difficulties that it implies), the activation of Article 105.6 in order to entrust the ECB with new tasks in supervision would not require a Treaty change, but would need unanimity in the Council of Ministers and assent by the European Parliament to come into force. However, entrusting the ECB with more powers has been opposed by many for two reasons: first, the UK would be left out of the core decision-making body of financial regulation when the City of London is the largest financial market in Europe; and second, investing more power in one institution in the absence of any political counterpart may exacerbate the existing institutional asymmetries.

In the midst of this debate, the De Larosière report released in February 2009 gave support to a third-way approach, proposing an overall reform based on two new institutional elements:

The De Larosière report has been welcome by all parties in the debate because it finds a middle point between intergovernmental and communitarian proposals for financial framework reform in Europe. The probability that it will serve as the basis for coming reforms was further strengthened with the release of the Turner Review in March 2009, which indicated a change in the UK´s traditional opposition to any type of panEuropean regulation in the financial sector.

But again, any attempt to improve the existing governance structures (even in the field of financial supervision) will end up in confrontation with the need to solve the fiscal debate at the European level. It is obvious that the existing national jurisdictional domain of the fiscal authority provides significant problems for proposals to grant financial supervisory powers to any EU body (either the ECB or any new regulator). Macroprudential supervision could be granted to a European body if it only had a limited advisory role, but in the current framework governments would be unwilling to cede national micro-prudential supervisory powers to an EU body whilst they hold the responsibility for bailing out financial institutions. If crisis management is to be at the European level rather than at the national level, there needs to be a federal source of money. Until the EU has fiscal powers which permit it to raise the funds needed to rescue distressed banks, or until there is a system of mandatory burden sharing between member states for fiscal support, supervision will remain the responsibility of member states. In this case, the real role of any new EU financial body will be very limited.

Focusing on a future framework

Clearly, serious advances on the path to an improved system of economic governance were put off in the Lisbon Treaty. However, while this treaty was being ratified the financial crisis exposed all of its weaknesses. In turn, the crisis has added a new area of debate to the traditional discussion on governance of the single market and the single currency. Now we have a Treaty that not only ignores traditional debates about the imbalances between the governing structures of monetary, fiscal and economic policies, but also imposes strong limitations on the introduction of a new financial authority that might solve the problems which led us into the current systemic crisis – the complete absence of financial supervision and regulation at the European level.

Despite the reluctance to promote any initiative in the field of economic governance that implies Treaty modifications, the events of this past year have shown European leaders and public alike that individual responses to global crises are useless. The situation only began to stabilise in Europe after European leaders met in Paris in early October 2008 and decided to coordinate a common framework to solve the financial crisis. In my view this has definitively legitimised the political the role of the Euro group in times of distress, and has offered the first taste of what a European economic government might look like.

Even if this did not lead to breaking point, it at least served to change the tone of the previous debate, allowing us to reconsider some vetoed aspects of European integration. Whatever happens in the field of economic governance in the near future will depend on the political will of the leaders to push for major reforms, even at the expense of a new Treaty reform. Under both scenarios there are several options at hand:

Over the past 50 years, all areas of European union and governance have been constructed in a step by step process. The case for a new system of economic governance will not be an exception. Yet, in reflection, it was not so long ago that, during the previous European recession of the early 90s, many questioned the very viability of the monetary union itself. But, here we are today in a situation were the euro has protected its members from major financial turmoil. Full economic integration will only come about in stages based on a joint political effort. Preventing future financial crises from happening should be an important motivation to push that joint effort forward in the years to come.